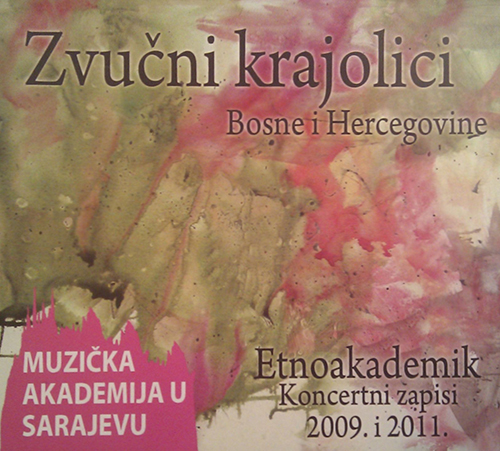 Encounter with traditional music can be surprising, seductive, inspiring, and positive or negative?! We can only listen to it, accept it, and discover if we like it or not. Meeting with traditional music of Bosnia and Herzegovina leaves us spellbound and wondering at its diversity and beauty, and the fact to what extent the climate and local architecture intensively and deeply influence the soundscape. We are puzzled with how much is emphasised the difference between rural and urban soundscapes expressed in shaping and building instruments, dancing moves and singing styles. In encountering with traditional expressions of Bosnia and Herzegovina we are dealing with music which exists only in practice, without notation or instructions of a composer. Therefore, we encounter with music that is part of the traditional culture. However, it is impossible to completely understand its structure, without realizing the cultural ‘’why’’ and musical ‘’what’’. As Alan P. Merriam said, ‘’…musical culture finally depends on people – their ideas, behaviour and sound they create.’’

When it comes to traditional music, sometimes it is difficult to accept the fact that it exists as profoundly organized sound, behaviour conducted and carried with rules, although, of course, freely and spontaneously listened, accepted, adopted, performed and passed on. It is completely clear that in the aforesaid continuum variations and mutual adjustments occur. In that way ethnomusicological task, among other things, becomes discovering and understanding those rules and principles. Deconstructing traditional musical concept to its scales, melodic and rhythmical patterns is important for determining how those function together through ideas of music within the certain local community. With that deconstruction and analysing we perceive various vocal genres of the rural area (old and new polyphonic singing) and the city (monodically conceived sevdalinka), respectively specific stylistic elements – distinctive treatment of intervals, ornamenting, organisation of the performance, dynamic shading, clearly distinguished ritual functions etc. Furthermore, we note different forms of playing practice which are in function of a song, dance, or exist as independent performance patterns. We also see that this is a traditional musical culture which is in constant process of changing and adapting to the social environment, so it happens that old patterns vanish as their culture, rituals and customs change. With fading of corresponding context, patterns disappear. Sometimes they can be sensed or recognized – transformed or stylized, in performance contexts of festivals and parades, in efforts of individuals and local communities, or in attempts of revitalizations, preservations and touristic presentations.

Often our idea of traditional music is a result of mass media production (audio and video records), where we forget that we consider music phenomena traditional, or in a broader sense folkloric, when arising from the living practice in which their performers with their free will included them, and when existing in direct contact with certain community. That is, as written by Jerko Bezić, ‘’folk music is there to be performed, and then to be listen.’’

We are aware of the fact that with performances of the traditional music, as with making records of it, just for the purpose of listening, this kind of practice is separated from its real context, and in that way, functional values of certain musical forms are generally lost.

Therefore, aware of a possible pitfall, we still decided to offer a compact disc with concert records of traditional/folk music of Bosnia and Herzegovina performed by ensemble Etnoakademik, without visible interventions and treatments. The intention was to present the way in which students of Sarajevo Academy of Music place their theoretical knowledge, gained in the field of ethnomusicology, in the context of performing practice. When selecting audio recordings, made at concerts and public performances in 2009 and 2011, we focused on representative, impressive and successfully performed examples.

Finally, we note that justification for this publishing endeavour is found in the fact that this kind of release, due to complexity of preparation, its non-commerciality and not meeting the prevailing demands of the audience, is very rare.

Etnoakademik is vocal ensemble acting at Academy of Music in Sarajevo. Ensemble was founded by Dr. Ankica Petrović in the late 80s of the last century, with members who were students of Department for Musicology and Ethnomusicology. After many years of interruption, ensemble continues its activity in 2003.

Program orientation of the ensemble is based on nurturing and presenting vocal, instrumental and vocal-instrumental music tradition, with secular and spiritual content, rural and urban practice of all three constitutive people of Bosnia and Herzegovina. In the recent period ensemble Etnoakademik presented its work at several significant manifestations, among which is the International Scientific Symposium Music in Society, organized by Musicological Society.

At the invitation of the National Museum in 2005 Etnoakademik made a concert for the representatives of diplomatic corps, in which guests from Posušje, Žepće, Kraljeva Sutjeska, Brčko and Sarajevo participated. Ensemble performed also in 2007 at the Exhibition of carpets from Bosnia and Herzegovina, which was organized by the same institution.

Etnoakademik also presented its work to the staff of the Embassy of Spain and England, and few of its members participated in activities of the American music camp Wilagge harmony held in 2006.

Programme content of the ensemble was presented in TV shows Neprolazna pjesma (Timeless song) and Svako dobro Bosno i Hercegovino (Wish you well Bosnia and Herzegovina) of the Federal Radio and Television.

Particularly worth mentioning are the evening concerts of the ensemble held in Bosniak Institute as a part of the May festivities of Sarajevo Academy of Music.

Ensemble is led by Tamara Karača Beljak and Branka Vidović.